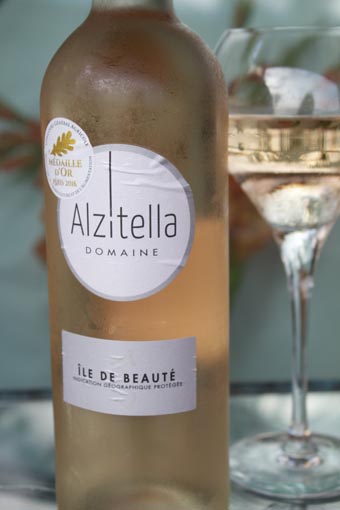 The history of winemaking on the island of Corsica dates back to 600 BC when the Greeks settled on the Island of Beauty. Later the tradition of Corsican winemaking was carried on by the Romans. The total area of wine production is 7,180 ha. Production is divided between 47% red wines, 34% rosés and 19% for white wines. The vineyard of the AOP Corsica covers 2700 acres and produces about 98,000 hectoliters. Maximum authorized yield on an annual basis is 55 hl AOP Corsica.

Corsican vineyards benefit from the warm and sunny Mediterranean climate. The Island of Beauty is blessed with more than 2,750 hours of sunshine per year, or about 7.5 hours of sunshine per day, and the resulting warmth is tempered by the moderating influences of sea breezes and local mountain ranges.

The geological diversity of Corsica is characterized by the presence of a mountain with different soils: a granitic soil (Balagne, Ajaccio, Sartène Figari Porto Vecchio), a slate floor in the east of the island and a soil of sedimentary rocks and limestone in the area that joins Balagne Corte and Bonifacio and Patrimonio. The partitioning of the island favors the highly aromatic Mediterranean varietals such as Nielluccio with the dominant tannic, fruity Sciacarello, and Vermentino.

Among the Corsican wines marketed by "VINS BREBAN" are AOP, IGP DOMAINE CASA ROSSA, and DOMAINE FAZI wines. Grape vines thrive in the clay-limestone soil, which is shaded in many places and marked by silty clays, as well as red sand and pebbles. As noted above, vines also benefit from exceptionally sunny and warm climatic conditions which are moderated by the proximity of the vineyards to the the sea and mountains.

The FAZI area is located on the eastern coast of the island, between Aleria and Ghisonaccia. Its vineyards surround the hamlet of Saint-Antoine near Ghisonaccia. The domain was established by Mr Vincent FAZI in the early 70s. Like many other parts of Corsica, this area benefits from an exceptional amount of sunshine all year, tempered its proximity to the sea and mountain ranges. Vines grown in this region have been well controlled for more than a century. The exceptional characteristics associated with the local geography, geology, and climate combined with the genetics of the traditional Corsican grape varietals such as Niellucciu and Sciaccarellu give rise to their very unique quality and originality. Tradition dictates that production is divided into 50ha wine AOP and 90ha of wine classified IGP. Separate vinification of grapes is standard, followed by cold liquid stabilization before temperature-controlled fermentation, and aging on lees with stirring of the lees performed in the field.

The Company "VINS BREBAN" holds exclusive rights worldwide for the marketing and distribution of wines produced by the CASA ROSSA and FAZI vineyards.

Copyright © Vins Bréban 2012-2021, all rights reserved Credits and Terms of Use

Copyright © Vins Bréban 2012-2020, all rights reserved Credits and Terms of Use