Three wines presented by the House of Breban were honored with Silver Medals at the 18th Annual International "Best Sparkling wines Worldwide Competition 2020."

The event is organized by the Forum Œnologie association and took place December 15th -18th, where approximately 150 medals were awarded to participants from 19 countries.

We will host a booth at "Prowein." to present new vintages and wines. You are cordially invited to visit our booth which will be located in Hall 11 at Stand E 110.

The « WineParis » fair will be held on February 10-12, 2020 at Paris Expo Porte de Versailles. The event was born from the union of Vinisud and VinoVision Paris in 2019. The last year 2,200 exhibitors and 30,000 professional visitors were participated in "WineParis".

The fair hosts the broadest range of wine producers and buyers from around the world. More than 100 of masterclasses, conferences and workshops will be on offer during event.

"Vins Breban" will participate in "Wine Paris" 2020. It will present new vintages and wines. You are welcome on our booth 4A047-3 in the Pavillon of Provence Wines. 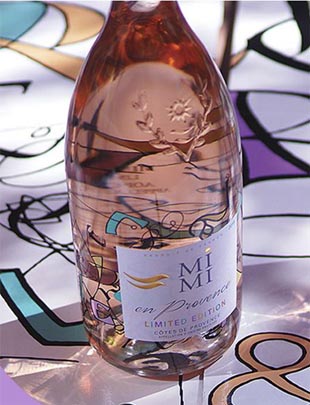 MIMI IN THE UNITED STATES

A distinguished example of Vins Bréban’s know-how, Mimi en Provence is making waves in the Americas with a new offering. In late March, 20,000 bottles of the limited edition, decorated by Denise Lach, crossed the Atlantic in matching boxes destined for the United States.

In March, as well, several bottles of Mimi en Provence were featured at the presentation of a new line of swimwear.

Mexico has a population of 131 million and attracts some 40 million tourists a year. Yet its populace has barely established itself as a mass consumer of wine. Vins Bréban’s strategy for market entry is similar to the one it adopted when it began selling to Brazil about ten years ago: enter the market that demonstrates strong sales potential.

Three wines presented by the House of Breban were honored with Silver Medals at the 18th Annual International "Best Sparkling wines Worldwide Competition 2020." Namely, the Arnaude rosé brut; the Arnaude white sparkling brut; and the Laurent Breban white sparkling brut BIO. The event is organized by the Forum Œnologie association and took place December 15th -18th, where approximately 150 medals were awarded to participants from 19 countries.

Copyright © Vins Bréban 2012-2021, all rights reserved Credits and Terms of Use